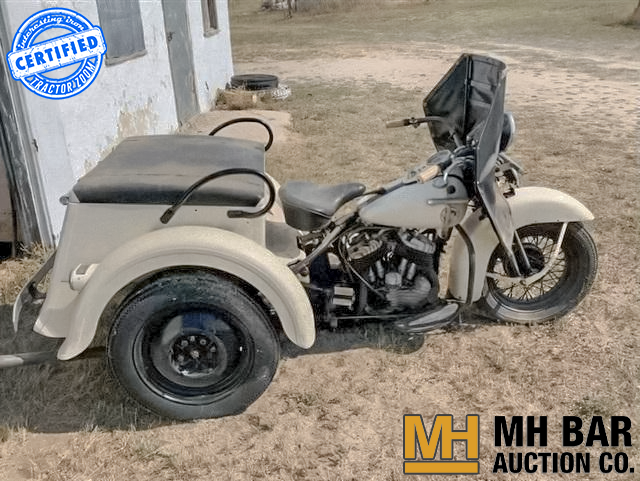 A Harley-Davidson Servi-Car … as a milk truck?

When Matt, Tractor Zoom’s auction success team manager, showed this Servi-Car to me on Monday, I thought to myself, “Finally, a Harley that my wife will let me buy!”

Actually, funny story about that. I’m sitting in a hospital waiting room writing this; Kara’s having shoulder surgery this morning. About an hour ago, I was in the room while they prepped her, and the nurse went over post-op instructions. The last instruction she gave us was, “Kara, no major life decisions over the next 24 hours…”

At any rate, enough about my life.

Let’s talk about this Harley-Davidson milk hauler for a bit. The 1957 Harley-Davidson Servi-Car pictured above sells on Saturday, October 30, 2021. Take a look at this week’s Interesting Iron here! This thing is pretty neat, and as I found out, these Harleys have a rich tradition in the company’s history!

Initially built as an economical “shop truck” for mechanics and dealerships, the Servi-Car soon found itself used by everybody from ice cream vendors to police departments!

For years, Harley had tried to expand their product offerings to include something on the commercial side of the marketplace.

They’d had very limited success with a “motorcycle truck” in the 1910s. The Milwaukee post office used it for a year or two to deliver the mail. Truthfully though, I’ve seen photos and they looked awfully light-duty. Imagine an overgrown tricycle with a great big steel box on the front of a two-wheeled front axle. It didn’t look all that practical, and with a single rear wheel driving the contraption forward, it wouldn’t have been real stable.

It was only in production from 1913-1915, so Harley learned fairly quickly that this wasn’t the way to go.

This one was a lot more successful. It was a sidecar-based add-on that any regular Joe could buy for as-needed use. Essentially, it was a big box mounted on a sidecar frame that opened toward the driver. It would have been the paperboy’s ultimate delivery unit!

The Package Truck apparatus was introduced in 1915 and remained in production until 1957! Yes, 42 years is a pretty solid run!

The Harley-Davidson Servi-Car was by far the most successful of the early commercial products. This was the one where they got it right. Launched in 1932, it was initially designed for service stations and car dealerships. Harley included a hitch so that it could be towed behind a car. Basically, if a mechanic was delivering a finished car back to the customer, they’d tow the Servi-Car behind it and just ride it back to the shop. Or, if a customer had purchased a new car, the sales guy could deliver the car and then ride the Harley back to town.

Indian beat them to market by one year with the Dispatch Tow, a nearly identical model based on their Scout motorcycle. However, Harley made a better go of it with the Servi-Car because their marketing team got the word out more effectively. I also think Harley had better experience working with government entities – law enforcement, the military, etc.

The storage box on the back of the Servi-Car would carry over 600 pounds, according to some of Harley’s advertising! Seems like that little V-twin would have its hands full with that kind of weight, though!

The box on the back of the Servi-Car is super-utilitarian, and customers found all sorts of unique uses for them!

From box options to engines, brakes to running gear, Harley made a lot of changes to the Servi-Car over the years to keep it relevant. The releases were typically fairly small; no big moves all in one model year, per se. Harley just kept making the motorcycle better. A little tweak here and there, throughout the life of the model.

There were a couple of major changes. In 1937, an antiquated (and pretty inefficient) total loss oil system engine was replaced by one with a recirculating system. It wasn’t a big powerhouse, but it was simple, efficient, and reliable.

In 1937, Harley introduced the W-Series powerplant for the Servi-Car. That engine would power the model for the next 41 years with minimal changes!

The 1940s brought a better frame and axle, and an upgraded transmission. Harley also consolidated box size options down to just one, making it easier and cheaper to manufacture.

The redesigned steel cargo box (trunk?) was in production from 1942-1967, when Harley opted for a fiberglass version for the final few years of the model’s run. The steel box models bring better money with collectors.

At the end of the day, the Harley-Davidson Servi-Car was a great motorcycle, and they knew how to market it. The simplicity and utility of the thing made it very attractive to everyone from the local mechanic to big city police departments, and as a result, Harley sold a ton of ’em! It’s still one of the longest continuously-produced motorcycles Harley’s ever built!

Sadly, there aren’t many of these things left. Because they were so useful, the majority of them saw very long duty cycles. (Heck, some police departments were still using them in the mid-1990s.) As a result, a lot of them were scrapped after basically being run into the ground. A few have survived, but not many.

That brings us to our Colorado milk truck…

The 1957 Harley-Davidson Servi-Car you can buy this weekend…

I did a little digging on the internet to see if anybody had ever seen a Servi-Car used as a milk wagon, and came up pretty much empty. The closest I got is a black and white photo of a Servi-Car ice cream truck. Close(ish), but no cigar.

I’ll bet this sign brings a small fortune on Saturday’s auction. Old signs like this are always hot, and this one is in pretty good shape.

As I understand it, Maurice and Mary Hahn took over the dairy from her parents back in the early ’50s and ran it together until the mid-1980s when Maurice passed away. For some of the dairy’s active years, Maurice used that 1957 Harley to deliver milk to his customers! I’m not sure when he parked, but I know it sat in one of the barns for quite a while. A few years ago, a Harley mechanic went through the bike and got it back into running condition, but then it was parked again. Last I heard, Mike Heitman and his team were working on getting it running again for the auction.

Believe it or not, this Harley-Davidson Servi-Car is mostly original. Obviously the rubber isn’t original, but from what I’ve been told, this motorcycle is pretty much the same as when it left the factory. I’m not sure on the paint. I think it was repainted at some point, but I don’t know for sure. It’s missing some of the trim on the front fender, but the brightwork is very good. Even in dry climates where rust isn’t an issue, finding chrome in good shape isn’t easy. I believe that 1957 was the final year for the springer front end, too, and a lot of Harley fans have a thing for the springer front ends. They have a classy old-school look to them!

Our Iron Comps database was zero help on this one, but Dana Mecum and his team have sold a bunch of ’em over the past 10 years. Most of the ones they sold were restored and in the $15 to $20K range. In fact, I think only one was truly original – and it looked like it had been ridden hard and put away wet. It still brought over $15K!

If Mike and the MH Bar team are able to get it running prior to the auction, I think we’ll have a good chance of this one seeing the mid/high-teens when the hammer drops. If not, I’ll bet it still goes north of $10K. These are tough to find – especially in great shape like this one!

It will be fun to see how this one shakes out on Saturday!

Hi! I’m Ryan, and I love tractors. It doesn’t matter if it’s a showpiece, an oddball, or seen its share of life … if it’s unique and it’s listed by one of our auctioneer partners at Tractor Zoom, I’m going to show it off a little bit! This equipment is all up for auction RIGHT NOW so you can bid on it. I think it’s cool, and I hope you will too! This is Interesting Iron!